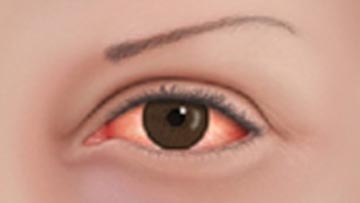 Rosacea (pronounced rose-ay-shah) is a chronic disease that affects both the skin and the eyelids.

People with rosacea affecting their skin may flush easily and have redness, acne-like symptoms or both, on their nose, cheeks, chin or forehead. People who have ocular rosacea (involving the eye) may have:

A non-contagious infection of the eyelids can also occur and may cause redness and swelling on the lids and at the base of the eyelashes.

More than half of people with rosacea affecting their skin have some symptoms of ocular rosacea. However, some people may have ocular rosacea without showing any skin symptoms.

Approximately 13 million people in the United States have rosacea. It usually occurs in adults (especially women) between the ages of 30 and 60. Although people of any skin color can develop rosacea, it tends to occur most frequently in people with fair skin.

Scientists do not know what causes rosacea, but some think that genetics and environment may play a role in its development.

Some researchers believe that rosacea is a disorder that involves swelling of the blood vessels, resulting in flushing and redness. Other scientists think that a microscopic organism or mite in tiny facial hair follicles may clog the skin?s oil gland openings, causing swelling and redness. Some research has also shown a possible link between rosacea and the bacteria called Helicobacter pylori? the same bacteria that cause gastrointestinal infections.

Several factors are known to aggravate (but not cause) rosacea, including:

How is rosacea treated?

Rosacea cannot be cured, but it can usually be treated and controlled. For skin symptoms, doctors usually prescribe either a topical antibiotic (which is applied directly to the skin) or, in more severe cases, an oral antibiotic (taken by mouth). Ocular symptoms usually are treated with oral antibiotics, such as tetracycline or doxycycline, or with prescription eyedrops or ointments containing steroids. Artificial tear-type saline solutions can help to relieve some of the symptoms of ocular rosacea by keeping eyes well-moisturized. Some people, however, should avoid using eyedrops specifically meant for clearing up bloodshot eyes, as these eventually can make ocular rosacea symptoms worse.

Doctors recommend that people who develop eyelid infections with rosacea should practice good lid hygiene regularly. One option is a method called eyelid scrubs, in which patients gently scrub their eyelids with baby shampoo mixed with warm water on a clean washcloth. Another option is to use an eyelid cleaning product recommended by your ophthalmologist. Warm clothes or pads should also be applied to the eyes several times a day.

Ocular rosacea, on occasion, may affect eyesight if it is left untreated. Once ocular rosacea is treated and controlled, a patient’s condition generally improves.

Click Here for more information on rosacea from the National Institutes of Health.