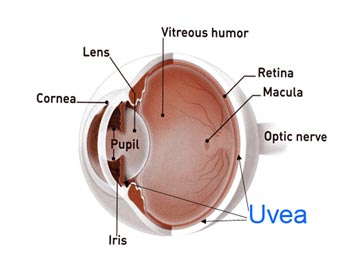 Uveitis (pronounced you-vee-EYE-tis) is inflammation of the uvea, the middle layer of your eye. The eye is shaped much like a tennis ball, with three different layers of tissue surrounding the central gel-filled cavity.  This gel is known as the vitreous humor.

What is the importance of the uvea?

The uvea is the layer in-between the retina and the sclera.

The uvea contains many blood vessels- the veins, arteries and capillaries that carry blood to and from the eye.  Since it nourishes many important parts of the eye, (such as the retina), inflammation of the uvea can damage your sight.

What are the symptoms of uveitis?

Symptoms of uveitis include:

A case of simple “red eye” may in fact be a serious problem of uveitis. If your eye becomes red or painful, you should be examined and treated by an ophthalmologist (Eye M.D.).

Uveitis has many different causes:

How is uveitis diagnosed?

A careful eye examination by an ophthalmologist is extremely important when symptoms occur. Inflammation inside the eye can permanently affect sight or even lead to blindness if it is not treated.

Your ophthalmologist will examine the inside of your eye. He or she may order blood tests, skin tests or x-rays to help make the diagnosis.

Since uveitis can be associated with disease in other parts of the body, your ophthalmologist will want to know about your overall health. He or she may want to consult with your primary care physician or other medical specialists.

Are there different kinds of uveitis?

There are different types of uveitis, depending on which part of the eye is affected.

When the uvea is inflamed near the front of the eye in the iris, it is called iritis. Iritis has a sudden onset and may last six to eight weeks.

If the uvea is inflamed in the middle of the eye, it is called cyclitis. Cyclitis affects the muscle that focuses the lens. Cyclitis can also come on suddenly and last for several months.

An inflammation in the back of the eye is called choroiditis. Choroiditis is slow to begin and may last longer.

How is uveitis treated?

Uveitis is a serious eye condition that may scar the eye. You need to have it treated as soon as possible.

Eyedrops, especially corticosteroids and pupil dilators, can reduce inflammation and pain. For more severe inflammation, oral medication or injections may be necessary.

Uveitis can be associated with these complications:

These complications also may need treatment with eyedrops, conventional surgery or laser surgery.