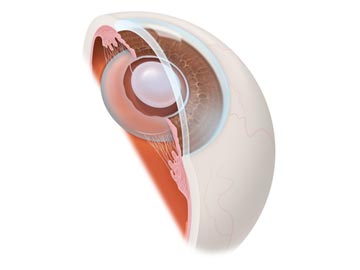 An intraocular lens, commonly called an IOL, is a tiny artificial lens for the eye

An IOL permanently replaces the eye’s natural lens when it is removed during cataract surgery.

Why is the eye’s natural lens removed during cataract surgery? 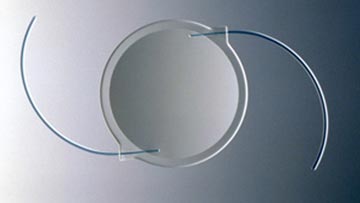 Normally, the eye’s natural lens is clear, allowing light to pass through and focus on the retina. When a cataract forms, the lens becomes cloudy, and light can no longer remain sharply focused when it passes through the lens to the retina. As a result, vision becomes blurred. The only way to treat a cataract is by removing the clouded lens itself.

Can I see clearly without a lens?

No, the eye cannot focus properly without a lens. Thick eyeglasses, a contact lens or an intraocular lens must be substituted to restore the eye’s focusing power. Because an IOL is a permanent replacement for the natural lens, it is used in the majority of all cataract surgery patients. The IOL provides better vision than thick eyeglasses do, and it is much more convenient than a contact lens because it doesn’t have to be taken on and off the eye.

How will an IOL affect my vision?

IOLs come in different focusing powers, just as contact lenses or prescription eyeglasses do. Your ophthalmologist (Eye M.D.) will perform a special preoperative evaluation of your eye to determine the proper power of the lens implant. The length of your eye and the curvature of your cornea are measured with special instruments. Your ophthalmologist then uses these measurements to calculate the correct focusing power of the IOL.

The natural lens of your eye has the ability to change shape in order to focus at varying distances. The IOL, which cannot change shape, can be calculated to see clearly up close, at mid-range, or at long range. In most cases, you will wear thin glasses to allow you to see all distances in focus. There are newer IOLs, which allow for different focusing powers within the same lens. With these multifocal or accommodative IOLs, it is possible to see more clearly at various distances than monofocal or fixed-focus lenses. You should discuss these possibilities with your eye surgeon, and together, you will decide which lens is right for you.

In most cases you should notice significant improvement in vision after cataract surgery.

The implanted IOL is seen centered and behind the iris, taking the place of the natural lens.

Where will the IOL be placed?

An IOL is placed in the center of the pupil, either in front of or behind the iris (the colored part of your eye). It is most commonly placed behind the iris where the natural lens was located.

What is the IOL made of?

Most of the IOLs implanted today are made of silicone or acrylic materials. These lenses can be folded and inserted through a small (approximately 3 millimeter)incision during cataract surgery. In the past, IOLs have been made of hard plastic, similar to a hard contact lens.

Will the IOL ever need to be replaced?

IOL implants are well tolerated by the eye and are intended to last for a lifetime. Only rarely do the lenses need to be removed and replaced.

What are the risks of IOL implantation?

The success rate of cataract surgery with an IOL implant is excellent, resulting in improved vision in the majority of patients. A small number of patients may have problems, though they may not be caused by the IOL itself. Complications following cataract surgery may include:

Be sure to discuss potential complications with your ophthalmologist before surgery.