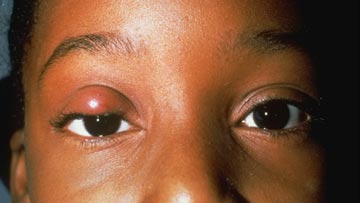 A chalazion is an enlargement of an oil-producing gland in the eyelid.

What is the difference between a chalazion and a stye?

How is a chalazion treated?

About 25 percent of chalazia have no symptoms and will disappear without any treatment. Sometimes, however, a chalazion may become red, swollen and tender. A larger chalazion may also cause blurred vision by distorting the shape of the eye. Occasionally, a chalazion can cause the entire eyelid to swell suddenly.

Symptoms are treated with one or more of the following methods:

Steroid injections. A steroid (cortisone) injection is sometimes used to reduce inflammation of a chalazion.

A chalazion usually responds well to treatment, although some people are prone to recurrences. If a chalazion recurs in the same place, your ophthalmologist may suggest a biopsy to rule out more serious problems.