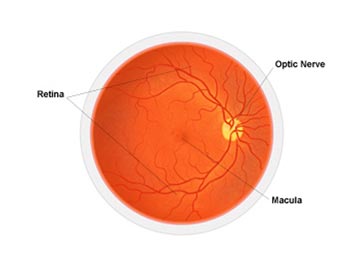 Age-related macular degeneration (AMD) is a disease of the macula, the small part of the eye’s retina that is responsible for our central vision.

This condition affects both distance and close vision and can make some activities like threading a needle or reading very difficult or impossible.  Macular degeneration is the leading cause of severe vision loss in people over the age of 50.

Many people with AMD have deposits under the retina called drusen. Drusen alone usually do not cause vision loss, but when they grow in size or number, there is an increased risk of developing advanced AMD. People at risk of developing a late stage of AMD may have a large amount of drusen or they may have abnormal blood vessels growing beneath the macula.

How can vitamins and minerals affect AMD?

A scientific study called AREDS (Age-Related Eye Disease Study) has shown that some antioxidant vitamins and zinc may reduce the impact of AMD in some people.

More than a decade after the first Age Related Eye Disease Study (AREDS) showed that taking daily doses of vitamins C and E, beta-carotene, zinc and copper slows down the progress of age-related macular degeneration, a second study (AREDS 2) has revealed that the risk of developing advanced AMD was further reduced by replacing the beta-carotene with lutein and zeaxanthin, which are naturally occurring carotenoids found in green leafy vegetables such as spinach, kale and yellow carrots, peppers and other colorful green leafy vegetables. 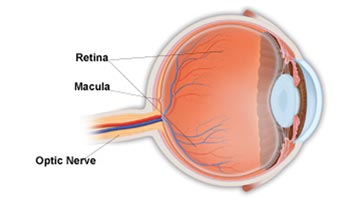 An Inside View of the Eye

AREDS 2 found that people at higher risk for late-stage macular degeneration who followed a daily dietary supplement of vitamins C and E and Lutein and Zeaxanthine, along with zinc and copper, had a significantly lower risk of the disease progressing to advanced stages. The same treatment did not appear to achieve the same results among people without AMD, or within the first stages of the disease.

The daily dose of nutritional supplements used by AREDS 2 that proved to be beneficial contain:

The levels of antioxidants and zinc that were shown to be effective in slowing AMD’s progression cannot be consumed through your diet alone. These vitamins and minerals are recommended in specific daily amounts as supplements to a healthy, balanced diet, to benefit the health of people with minimal presence of AMD, or those without evidence of macular degeneration.

Some people may prefer not to take high dosages of antioxidants or zinc for medical reasons. The AREDS study did not reveal any evidence that the treatment may be toxic. However, with the original AREDS formula, beta-carotene caused concern because it may increase the risk of developing lung cancer among smokers, or those who have quit smoking recently. Now, with AREDS 2, beta-carotene supplements can be avoided.

Should I take antioxidant vitamins for macular degeneration?

It is very important to remember that vitamin supplements are not a cure for AMD, nor will they restore vision you may have already lost from the disease. However, specific amounts of certain supplements do play a key role in helping some people at high risk for advanced AMD to maintain their vision. Talk to your ophthalmologist (Eye M.D.) to determine if you are at risk for developing advanced AMD and to learn if supplements are recommended for you.